JB:  In the early 90’s I transferred from Diablo Valley College, a community college in Pleasant Hill, CA, to California State University, Sacramento.  After earning a Bachelor of Arts degree in Art from CSUS, in 1994, I looked for any work I could find in my field with just an undergraduate degree. My first job in the arts was working with disabled adults. I had a brief stint teaching art at the Short Center South, before landing a full-time job at Southside Art Center where I also taught art classes, and took students out on excursions into the world-at-large as a community access instructor.  Not long afterwards, while continuing to look for interesting work through the want ads in the newspaper, I saw an announcement for an Artist! The job turned out to be a gig teaching visual arts classes to incarcerated juveniles through the California Youth Authority system. It paid well, as it should have considering that I signed away my rights for the authorities to negotiate for my life in the case of a hostage situation. Between undergraduate and graduate school I had the opportunity to attend The School of the Art Institute, Chicago, for a couple of summer sessions as I toyed with the idea of attending graduate school there in the future. I also taught art classes to children in a number of venues, and finally taught for an entire school year at the Natomas Charter School Visual and Performing Arts Academy. This experience, which revealed my lack of classroom management skills in a room full of hormonal teenagers, was the determining factor which lead me away from obtaining a teaching credential and towards earning a master’s degree. While attending Claremont Graduate University I continued to teach art; working in the adult prison system through the Arts in Corrections program. After earning a Master of Fine Arts degree in 2002 I returned to Sacramento and began teaching at American River College where I have taught for the last ten years. I have also taught at Sierra College for the last eight years, and was recently hired to teach at California State University, Sacramento.

SAHC: Can you give us a brief description of your creative process? What is your preferred medium and style?

JB: Although I have primarily identified with being a painter for much of my adult life, I’ve also picked up the habit of pyrography, otherwise known as wood-burning. Additionally, I work in assemblage, and tend to incorporate painting and pyrography into these three dimensional works.  I consider myself a narrative artist who draws upon personal experience, along with invention, to create works that are at times humorous, absurd, and dark. I am also interested the reinvention of historical works of art to reflect contemporary themes.

SAHC: As a Sacramento artist what responsibilities do you believe that you have to the local and the global community?

JB:  I think it is important to participate in, and promote, the scene here. I’ve tried to do this by supporting fellow artists through collecting their works, creating opportunities for them to exhibit, and by creating venues for them to present lectures. While artists complain about the local art scene, and Sacramento in general, as someone who has chosen to live here, I feel an obligation to work with what we’ve got, and contribute to it, rather than disparage it. 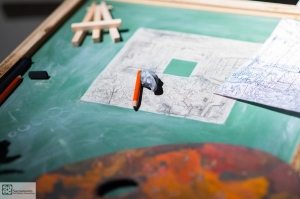 SAHC:  What advice do you have for emerging artists, or those pursuing a career in the arts?

JB:   Where to begin? First, I admit that from the moment I declared art as my major, I defended my decision by stating that I would make a living by teaching. I didn’t know if I would like teaching or if I would get a job, or even if I really would…teach. But I do like it, and even have moments when I feel like I am pretty good at it.  I never imagined trying to make a living by selling my art, and I knew that the commercial or graphic art route was not one I wanted to pursue either.  My advice, go with your gut, do what you want, and try to find a way to support your art habit. Experiment, make work that speaks to you, and surround yourself with good people that share your values. You probably won’t make a lot of money, so try not to live beyond your means. Finally, don’t bury your head in the sand; every young artist thinks they are the first. So, know your history, know the artists that came before and try to keep up on what’s happening now!

SAHC:  Who are some of your favorite Sacramento Artists, and why?

JB:  I have to say that I have been collecting art for only about ten years, but since that time I have accumulated the works of at least 30 artists from this region. I have acquired work by purchasing it (many galleries and individual artists will take payments spread out over a period of time), trading, and occasionally begging. With that said, I will mention just some of my favorites. Also, keep in mind that my descriptions of why I find these artists’ works stimulating may, or may not, align with their own views of their work.

In alphabetical order I will begin with Julia Couzens who can make poetry out of any material. Tape drawings, yarn webs, and flattened strawberry basket wall hangings are just a few examples of the kinds of things she makes.  She is clearly driven by her own fascinating investigations.

Anne Gregory uniquely combines beautiful patterns, textures, and colors with unsettling figures, some reminiscent of those made by non-western cultures. Her watercolors, and mixed media large-scale charcoal drawings, often include layers of plant and animal imagery along with male and female figures.

Jack Ogden animates the subjects of his paintings in such a way as to make objects behave, or misbehave, in surprising ways. Brushes shuffle across the surface, paint sloshes from bowls, flat planes refuse to remain seated.  Even his figures, posed in groups, present a conundrum; the blankness of their expressions seems to deny the evidence at their feet.

Ron Peetz makes conceptual artworks, or “one-liners” as I’ve heard him call them, that are both smart and funny. He is not limited by mediums, but instead chooses the objects, materials, and processes, that best present the ideas he is trying to convey. One such example consists of two mirrors, each hung on the far edge of two adjoining walls meeting at the corner. One of the mirrors is etched with the word “ah” in the center, which creates the words “ah ha” revealed through the reflection of the word in the other mirror.  The moment of revelation, that “ah ha” moment, is experienced in the split-second it takes to see, read, and comprehend the reflection. The experience is mirrored in the work, and the work demonstrates the experience in the mirror; to the delight of the spectator. 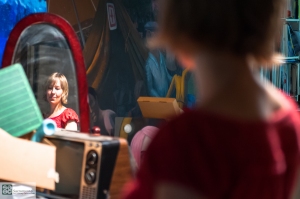 SAHC:  Where are some of your favorite Art/ Art History resources found?

JB:  Like many people who used to subscribe to art magazines, I have primarily transitioned to getting my information digitally. Occasionally I still pick up an Art News, Art in America, Frieze, or Art Ltd. I subscribe to New American Paintings, and I receive emails from a number of galleries and museums, so I get introduced to artists via email regularly. I read art reviews online at www.artslant.com which has reviews of exhibits in major cities around the world, while www.squarecylinder.com, by David M.Roth, is a great resource for local and Bay Area shows. Renny Pritikin, an Art Practical contributor, turned me on this online publication which focuses on Bay Area art and can be found at www.artpractical.com. As a member of the College Art Association I occasionally read articles from their publications such as Art Journal or The Art Bulletin. I also have my collection of weathered, and new, art history books, and catalogues from shows. The best resources are the galleries and museums themselves. 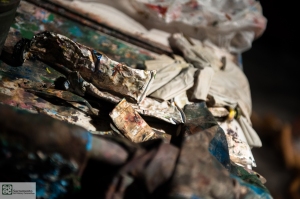 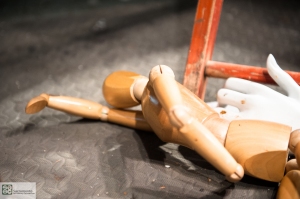 SAHC:  Is there anything else about the arts here in Sacramento that you would like share with our reader?

JB:  It’s funny because I think Sacramento’s art scene is quite visible and accessible to the general public, but every semester I get a new classroom of students who are oblivious to the scene here. Or, conversely, they have only heard about the crimes that have occurred during 2nd Saturday, despite the fact that those crimes occurred after the galleries had long closed up for the evening. Although art does not drive commerce here like it does in places like New York or Los Angeles, there is a surprising mix of artists involved in the arts, at many levels, who make work that challenges the notion of this being a naïve “cow-town.” That said, one of the biggest complaints from artists is that we do not have the patronage to support us. There are not enough private collectors, there is the Crocker Art Museum which can only purchase so many local artists’ works, and organizations such as the Sacramento Metropolitan Arts Commission continue to have their budgets hacked away at.

We have an impressive number of commercial galleries, considering that 20 years ago I could have counted them all on one or two hands. At last count I think there were at least 60 in the region, however many seem to pop up and disappear just as quickly, while others have a good run, and others still throw in the towel after years of struggling to stay afloat here. As a former board member of the Center for Contemporary Art, Sacramento, I am glad to see that the non-profit organization continues to redefine itself while simultaneously remaining a premier location to see contemporary art. They too suffer from major budgetary constraints, but manage to move with the times, by introducing QR codes on their exhibition labels, for example. This is just one example of how they engage the younger audiences, who get all of their news and information from their smart phones it seems. The Verge Center for the Arts, another non-profit organization, has also attracted the up-and-coming generation of artists, and art supporters, through their studio program and their popular events combining art, food, and music. They are still growing and developing; however I look forward to them re-opening, in about six months or so, with a full line up of exhibitions scheduled.

SAHC: Where can your work be viewed, or found online?